Corner Worker Looks – How many can you do per lap?

It’s time for a post about cars, this time for something that I call Corner Worker Looks.

So, what’s a Corner Worker Look? Any time you are driving on track and you look at a corner worker, you’ve just done a Corner Worker Look. This doesn’t mean that you have counted the lines on the corner worker’s face, only that you’ve glanced in their direction and you know that they are doing either nothing or something. Obviously if they are doing something, then you take that extra fraction of a second to see what they are doing. Are they standing up? Sitting down? Moving? Not moving? Waving a flag? Holding a flag in their hand, but not waving it? You get the idea.

The next time you’re at the track, ask 10 different drivers how many corner workers (or lights, as some tracks use lights instead of corner workers) are at the track. I’d be willing to bet that you if ask 10 different people, you will get multiple answers. That shouldn’t be the case, of course, as there is only one correct answer to the question. If you then follow up that question with “How many times per lap do you look at the corner workers?” I can guarantee that you will get a bunch of different answers. This question doesn’t necessarily have a single ‘right’ answer. As long as the answer is equal to or higher than the number of actual manned corner worker stations, then you’ve been given a ‘correct’ answer. However, just because an answer is correct, doesn’t mean that it’s the best answer. What’s the best answer? In general, the higher the answer, the better.

We look at corner workers when out on track because (in my opinion) corner workers are by far the most important thing to pay attention to when driving on track. Corner workers save your life. When you enter turn 2 at Texas World Speedway (TWS) in excess of 130 MPH, it’s the corner worker that lets you know that there is something around the corner that you can’t see yet blocking the track. Without the corner workers telling you what’s going on, driving on a track would be much more dangerous.

On a track with 8 manned corner worker stations (Texas World Speedway for example), I do 27 corner worker looks each and every lap. When I tell the students how many times I look at the corner workers per lap, I get a varied reactions. With new students I usually get a “How do you do that?” With more advanced students I get everything from “How can I do that?” to “That’s impossible and/or unnecessary.”

In addition to looking at the upcoming corner work, sometimes I’m looking 3 to 8 corners ahead of me, sometimes I’m looking a few corners behind me. I do this by setting a CWL Spot (Corner Worker Look Spot) at a specific place on the track. Every time I go over that spot I take a few hundredths of a second to see what the corner worker is doing. There are plenty of times that I’ll have line of sight to a corner worker that is so far away that I won’t be able to see exactly what kind of flag that they have, but I’ll often be able to tell if they have a flag or not. If they do have a flag, then I know that something is happening. The more I know about what’s going on at the track, the better I’m able to drive.

Did a corner worker behind me just throw a checkered flag indicating the end of a session? If I’m racing in a time trial, then I know that this is either my last lap to set a fast time or that I won’t be able to set a faster time than I already have, so I should back off and not run the risk of a spin. If I was only looking one corner ahead, then I wouldn’t have this information. Even more important, did the corner worker behind me just throw a red flag? It’s possible for different corner workers to respond at different speeds, so by looking at corner workers that I’ve already passed, I may learn something earlier than if I was waiting for the next corner worker.

I look so far ahead and behind because it gives me more information. Recently at TWS I was coming out of turn 2 and I was able to see that:

BTW, turn 7 is one of the fastest and most dangerous turns in Texas. It’s got severe on camber banking and a very dangerous track out. I’ve pulled 1.7 Gs going through turn 7 in my car. Coming out of turn 7 (very fast) you only have a small window to see the corner worker in 8 before you are past them…

So what did I know?:

By looking so far ahead I was able to be more prepared than most of the other drivers on the track. Especially those who were looking only one corner ahead.

Most drivers spend way to much of their visual energy focused on the car in front of them. Most drivers also don’t look as far ahead and behind as they could.

So here’s my challenge: How many CWLs can you do at your local track?

Below is my CWL map for Texas World Speedway. Each manned corner worker station is labeled with a letter from A to H. Frequently the corner worker station at the start finish line isn’t manned, but I always look, just in case it is. Each yellow dot is very near to the spot on track where I have a planned CWL Spot. Each is labeled with the corner worker letter that I’m looking at followed by the total number of times I’ve looked at a corner worker that lap. It starts with A-1 (yes, you can look through the garage structure as you cross start finish and see the corner worker in turn 2) and ends with H-27. That’s 27 looks a lap. If you have not been to TWS, there is quite a bit of elevation change on the track which let’s you see quite far at times.

Let me know what you think! 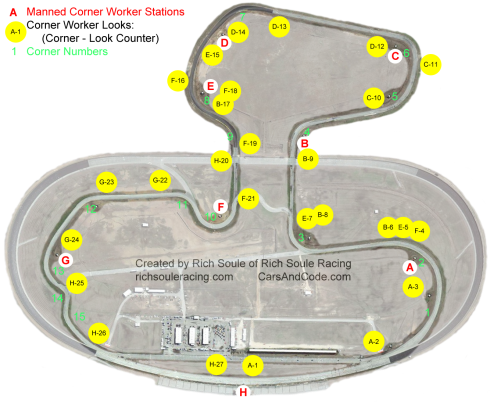 This entry was posted on Friday, October 7th, 2011 at 3:36 pm and tagged with Corner Worker Looks, CWLs, Texas World Speedway and posted in Cars, Rich Soule Racing. You can follow any responses to this entry through the RSS 2.0 feed.
« Intercontinental Ballistic Microfinance
24 Hours of Lemons Racing »

3 responses to “Corner Worker Looks – How many can you do per lap?”